How I lost (and found) my voice 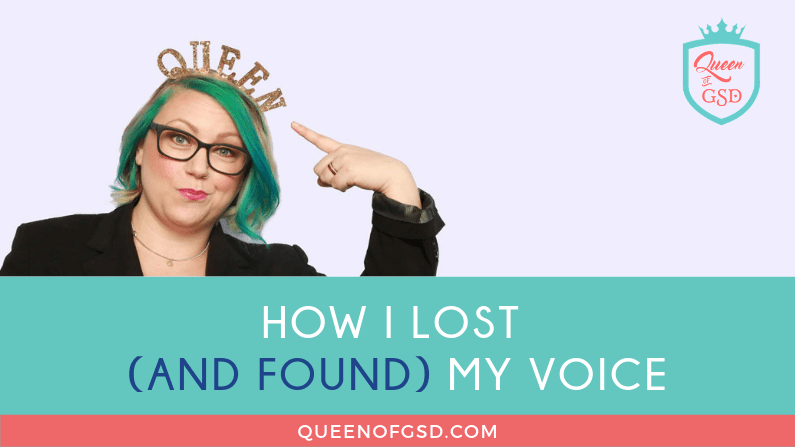 The year was 2006. It was before social media was huge and sharing pictures of food became the norm. It was a simpler time.

I was finishing up my undergraduate degree in Graphic Design and in my final semester, I was diagnosed with Multiple Sclerosis. Back in my day (2006), there wasn’t really a way to share this information with everyone I knew at one time and I’m not even really sure I wanted to share it with everyone. I was 21 and had zero people in my life I could talk to about MS, so I started a blog where I could essentially talk to myself. I had no idea what a pivotal moment this would be in my life.

I began writing about my life, fears, struggles and everything else about living with MS at a young age…and with the wonders of the internet, other people read it. In 2009, when I was also diagnosed with ulcerative colitis, I decided to up my blogging game and started sharing way too much information about my life with UC. And people read that one too. I had developed a way of sharing my story that was open and it was here that my “voice” was born. I prided my writing on being candid and embarrassed myself regularly on the internet for the greater good. I was honest, and vulgar and shared too much information but it was all me, and people liked it.

People liked it so much that other websites started asking me to write for them, which was mind-blowing at the time. People wanted to pay me to talk about this stuff? Ok, sign me up. For years I’ve been writing articles for various health sites about living with MS and Inflammatory Bowel Disease and over these years I began to write for a larger audience. My articles became less about me personally and more about general information regarding living with chronic illness. It’s all valuable information, but my tone and my voice had gotten lost. The sass and personality that helped me gain notoriety in the first place had gotten toned down in order to keep my pieces appealing to larger audiences.

It wasn’t until I decided to start Queen of GSD, that I realized how lost my voice actually was. I wrote all the copy for this website and it sounded stale and generic. It wasn’t me but it was the way I had learned to write. I was trying to appeal to the masses, to not offend and to be informative because that’s what I was used to. I remember being very frustrated with myself. Why the hell couldn’t I just write how I talk? Why was this so hard?

It took revision after revision to finally find my sass again. I had to talk out loud to other people about what I wanted to do, and who I wanted to work with in order to see what I would say off the tongue. It was weirdly like interviewing myself. It was in one of these verbal vomit sessions that I actually came up with Queen of GSD.

“I just get shit done. I’m like the queen of getting shit done”.

At that moment, when I decided to have “shit” in the title of my business, I knew I was back. It’s not just that I like to swear or that swearing is the brand I wanted to create, but it was that I had given myself the permission to run the risk of offending someone, while simultaneously opening myself up to the people who I really want to work with. And the result is that I work with women who are like-minded, sassy, powerful and direct. The women who like what they read here, like working with me because this is really who I am. I’m honest, I’m good at what I do, I swear, I have typos and I have grammatical errors if Grammarly doesn’t pick them up.

Don’t get me wrong… I still totally write for those other sites because duh, money. But I have to admit… I feel like I’m having a Brett Farve-like come back. It feels damn good to rediscover my voice in my writing, which is giving me the confidence I need to keep kicking ass.